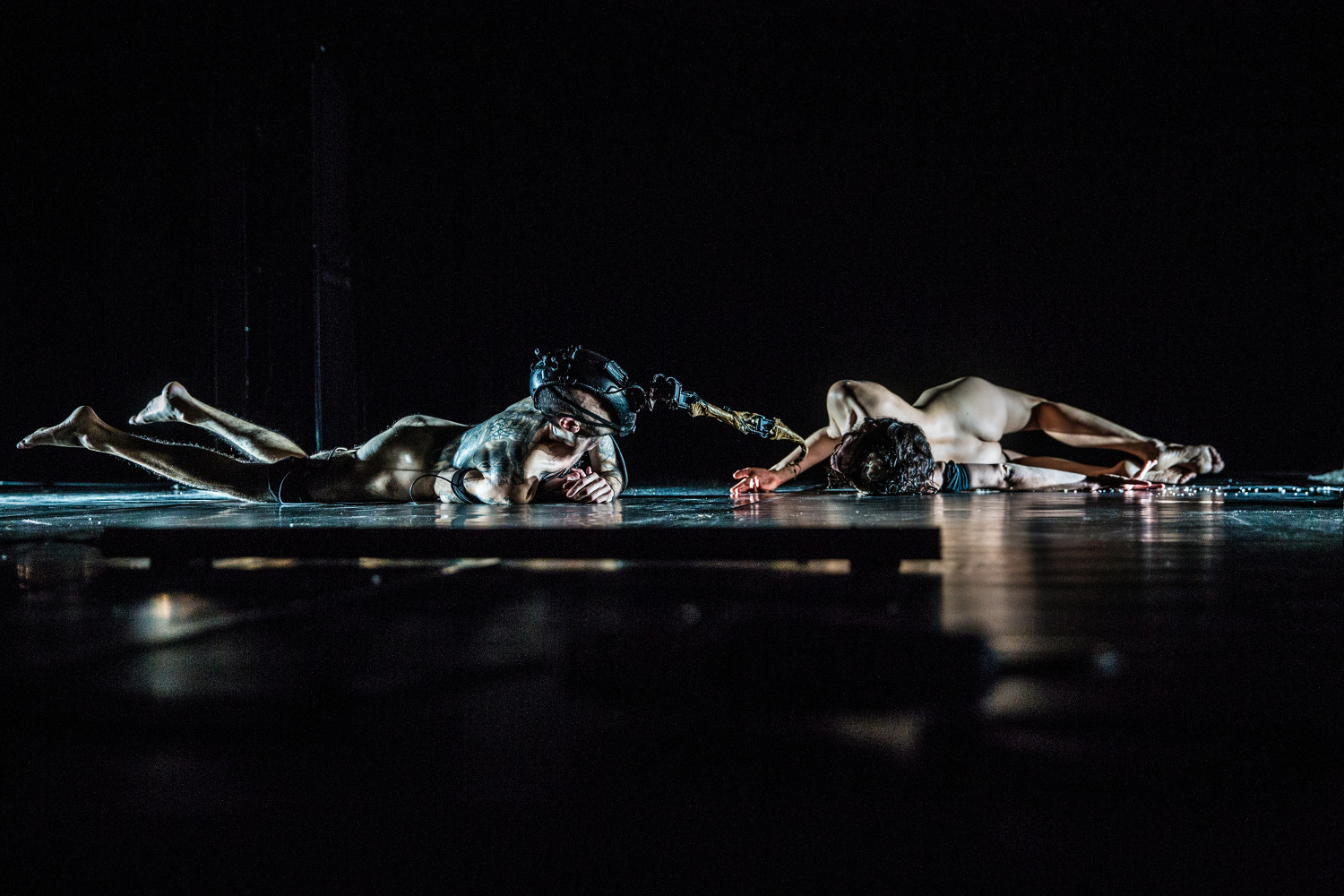 A piece by Marco Donnarumma in collaboration with Margherita Pevere .

“What does it mean to create a truly autonomous machine, independent from human control? And what happens when organs live outside of a body? Could this help us understand that the power of the human body lies in its ability to be different and to take on unexpected forms and identities?

The prosthesis uses AI algorithms to learn in real time how to move, exist and perform on stage. The organs pulsate, leak and crawl on the floor, bearing traces of the microbial cultures which created them. Sounds from the performers’ muscular activity are amplified and transformed by AI algorithms into a powerful and visceral auditive experience, submerging the spectators.

The performers’ bodies become, thus, one and multiple, at times asserting, at times misplaced. They are the means of a drastic form of bodily experimentation, where alternate identities emerge from the convergence of human, machine and micro-organisms. In such a configuration, each element drastically affect the other. Physicality and psyche are meshed up, shaken and probed.

A far scream from trans-humanist ideals or techno-phobic claims, Eingeweide creates its own vocabulary of symbolic meaning, manifesting the relationship between humans, technology and living-others as a harsh, poetic and humbling form of intimacy.

Eingeweide is part of the 7 Configurationscycle (2014-2018), a series of performances and installations at the crossroad between body art, tanztheater, sound art and media art. In the 7 Configurations Donnarumma, in collaboration with a range of artists, probes the physical, psychological and cultural conflicts surrounding the human body in the era of artificial intelligence (AI).

The cycle features machine performers in the form of AI prosthetic robots. Created by Donnarumma in collaboration with the Neurorobotics Research Laboratory in Berlin, the prostheses use tools from AI and humanoid robotics to mimic animal’s body coordination. Through haptic sensors and neural networks the machines sense and respond to the actions of the other performers on stage or to the physical constraints of their own environment.” 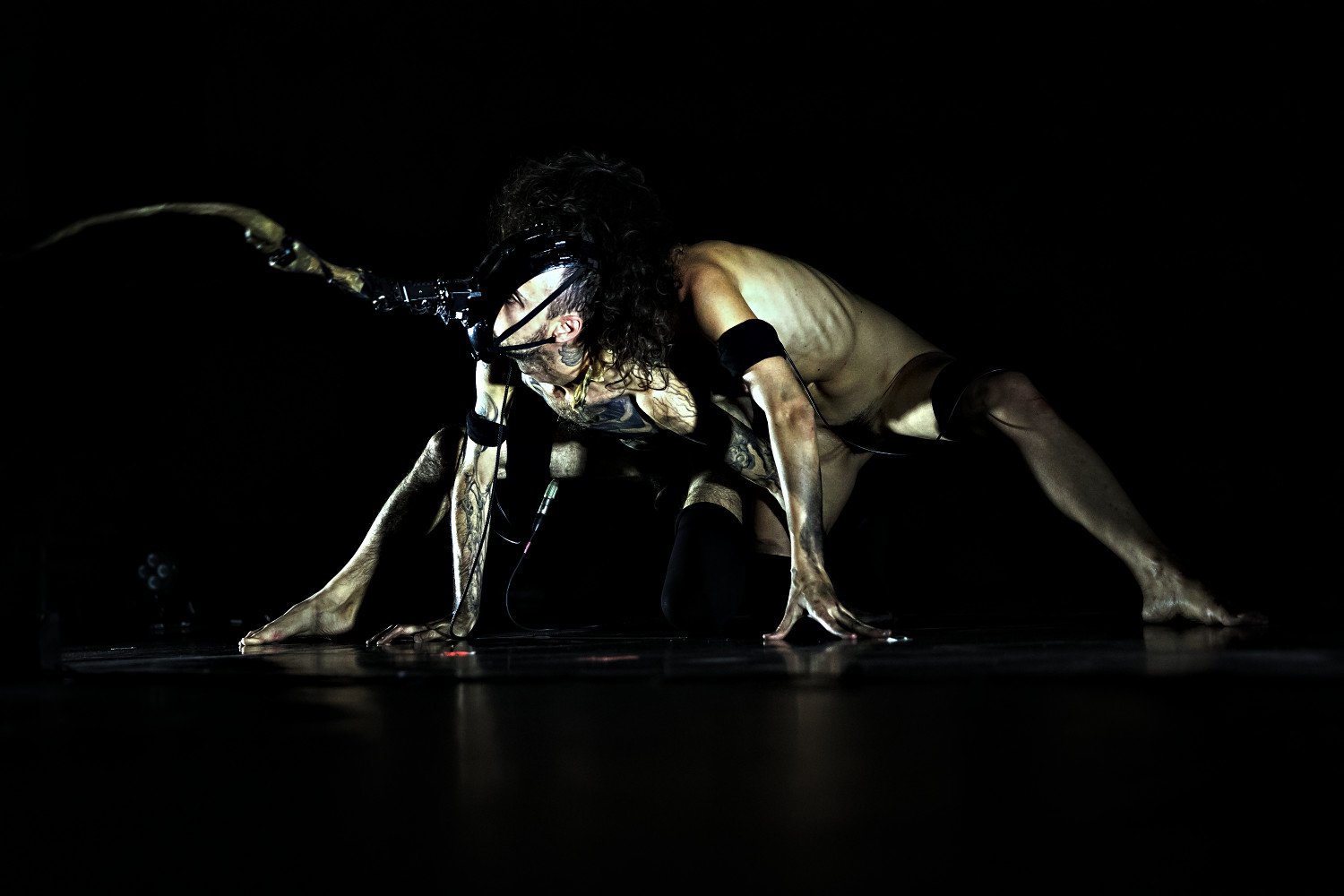 Commissioned by CTM Festival (DE) and realised in the context of the Graduiertenschule, Berlin University of the Arts. 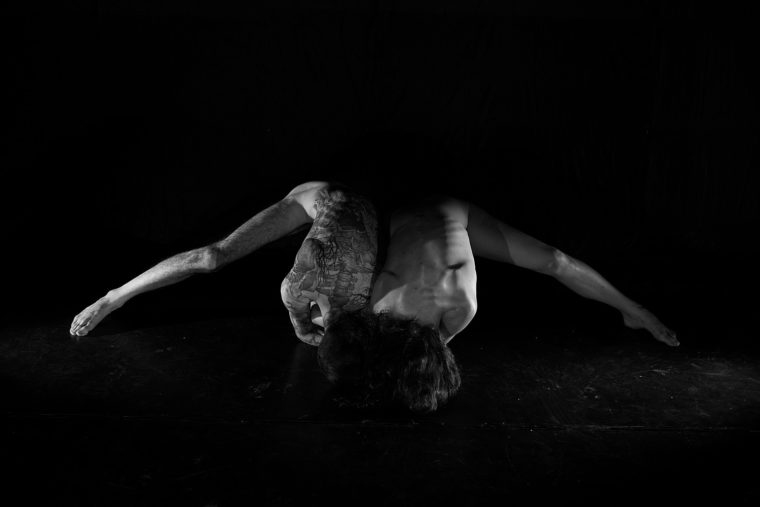